I consider myself to be a relatively safe driver, as I mentioned earlier this year. I'm engaged, relatively careful, and I consider myself to have pretty good driving skills. However, I may have been a hazard to other drivers because of the stuff I was carrying: mainly, vinyl stick-on logos and lightweight stuff in the back of a pickup truck.

The vinyl vehicle logos are meant to be slapped on once you arrive at the site. However, they don't stick so well once the vehicle has been covered with mud and/or road salt (nearly every day this winter). And at the end of a long week, it's easy to overlook and only remember you haven't taken the blasted thing off when you're 10 miles down the highway.

The stuff in the back of the pickup truck has a similar problem - you pack the pickup truck with all the big cases and boxes of supplies you need, and then at the end of the fieldwork you've shipped off the samples and what you have is a lot of trash to take back. Light, poorly-organized trash. So it's tempting to throw the trash bags in the back and head out... then you look in the rearview mirror and you see the trash bags levitating with every rut and wind gust.

I have managed to avoid striking anyone with flying chunks of vinyl. I may have been involved with an incident or two involving trash bags, but luckily, they were extremely light and I was on back roads without other traffic. Needless to say, I am now more careful to look over/pack whatever I'm driving before I head out.
Posted by Short Geologist at 8:07 PM No comments:

...the best days are the ones that you have to be inside.

We had a whiteboard that was supposed to be used for important notes and instructions. Instead, it turned into this: 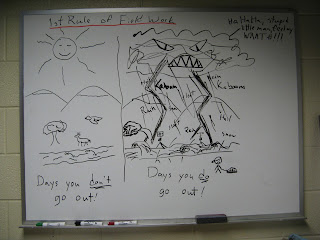 I can't disagree with any of it.
Posted by Short Geologist at 9:12 PM No comments:

I got wiped out by the flu, so I sort of lost track of things...

FSP has a semi-recent post about accepted prospective grad student visits. If a potential grad student behaves poorly at an accepted student event because they already have the acceptance in the bag, does that have repercussions for their future grad school performance?

This whole "visitation weekend" for grad students is somewhat foreign to me. None of the grad schools I applied to had one. And I had applied to a couple of big research universities with substantial graduate programs.

I think that the idea of a specific date/weekend for prospective grad students is a little... misguided. When I was applying to grad school, I was working full-time and I had limited vacation time. It was hard enough finding time to visit schools and meet potential advisors halfway across the country in the six months or so that I had between initial application and the acceptance deadline. I didn't have the flexibility of your average undergrad.

Then again, I was applying to grad school as a "non-traditional" student and wasn't coming directly from undergrad (although I was in the majority of the geoscience grad students I knew) so I favored schools that that valued students with more career/life experience. Perhaps those schools are less likely to have required/strongly recommended formal accepted student events?

With all that said, if I'd attended an accepted student event for grad school, I would indeed attempt to not make an ass of myself... especially since relationships with professors and other students can have a significant impact on your ability to work on a project you're interested in, get the funding you need, finish your thesis in time...
Posted by Short Geologist at 10:04 PM No comments:

Some of our biggest headaches in the environmental business are chlorinated solvents. The two biggies are related: tetrachloroethene (PCE, or perc) and trichloroethene (TCE). The former is a dry-cleaning fluid and the latter is a metal degreaser, and they're found practically everywhere. Also, TCE is a daughter product of PCE - if a bug (soil microbe) breaks down PCE, you end up with TCE, which can be broken down further to other, less chlorinated compounds.

PCE and TCE are problems for two reasons. The first is that they're super toxic. The maximum contaminant level (MCL) for drinking water is 5 µg/L (parts per billion). The second is that they are more dense than water.

PCE and TCE aren't terribly soluble. But they don't need to be very soluble to cause problems, with such a low MCL. So when they're spilled on the ground, they tend to sink down through the subsurface as a dense non-aqueous phase liquid (DNAPL), slide down any included surfaces, and pool on top of whatever little bit of resistance they encounter, often a tiny fracture in the bedrock. And from there, they will slowly dissolve over time, contaminating groundwater for decades.

Once in the bedrock, especially in super hard and resistant bedrock that doesn't fracture in predictable patterns (say, granite) and that is, say 50 feet below the ground surface, it's nigh-impossible to find the little pools of DNAPL that cause all the problems. You can drill holes all over the place, you can dig down and blast the bedrock, and you may only succeed in jostling the stuff further downward.

After three decades, we're getting better at finding and treating PCE, TCE, and other chlorinated solvents. But it's still time-consuming, expensive, and occasionally a matter of luck.

Posted by Short Geologist at 8:36 PM No comments:

I graduated from college and started looking for a job during a local ebb in the job market. Nobody seemed to be interested in hiring a new grad with less than 2 years of industry experience.

So I figured that job hunting would be a cakewalk once I had more job experience.

As an entry level geologist, I could have easily started working for local government, nonprofits, remedial design firms, consulting firms, and law firms. I could have operated under the guidance of an alphabet soup of federal laws (RCRA? CERCLA?) and a bewildering array of state rules, which may or may not bear any relation to each other. I was equally inexperienced at everything.

After a few years of fieldwork and a masters degree in something related to fixing stuff in the subsurface, I am a specialist. I have a good base of knowledge, which is pretty impressive... for a particular area of geology and regulatory regime. I provide lots of value in my area of expertise. The problem is that I'm operating in a very small world, so if I go job-hunting, I'm looking at a tiny number of firms that may or may not be looking for, well, me. And neither those firms nor I wanted me to start all over again as an entry-level generalist (although dire financial straits may change that calculus for me).
Posted by Short Geologist at 8:04 PM 2 comments: