fun stuff to drill through (4)

This post a while back on water handling reminded me of another geologic feature that's a pain to drill through: faults. (see my last post on this topic and some links to older posts here).

Now, I haven't overseen drilling into any spectacular or famous faults, per se. But I have very rarely drilled into faults of at least local significance - local enough to be mapped and named, anyway.

Drilling into faults or fault zones at any depth of significance (say, more than 50 feet or so) leads to two major issues: water production and borehole instability.

Larger scale faults tend to be more than just a single fracture in the bedrock. They may include a fault zone, where the rock for a certain distance is much more fractured and may possibly have a different structure than the parent rock. This may hold a lot of water. And if you're flying along, doing some sort of fast, aggressive drilling such as air-rotary, and creating a borehole with a reasonably wide diameter, you may end up tapping into a lot more water than expected. And depending on the air pressure the driller's using, the drilling rate, and the structure of the rock, the water flow may not just stop once the driller turns off the air pressure. Nothing like watching your frac tanks fill up with contaminated water while you wait for the water to stop pouring out of the borehole!

So, water production is a thing that you can deal with. You get the frac tanks on-line, make sure that you have pumps capable of moving a lot of water, and maybe stop drilling for a bit every once in a while to see how much water you're getting back. Borehole instability is another problem.

Once we install a borehole, we usually like to do a bunch of testing, which involves lowering instruments down there to collect samples and geophysical measurements, installing packers to seal off certain zones for testing, and maybe putting in a permanent system with multiple sample ports. If you have a fracture zone that's at a reasonably steep angle, and bedrock that is not super hard (like a siltstone or sandstone) you may find that the walls of the borehole pinch back in almost immediately. This makes it hard to fish the drill rods out of the borehole, let alone any $10,000 geophysical tooling you'd like to use. You can always try and bang in some steel casing past the obstruction, but at that point you may have shrunk the effective size of the borehole so you can't get the other stuff you need down there, and then you've shut off the rest of the bedrock from evaluation. And multiple boreholes get expensive fast. Another option is to be a lot more cautious up front, and do all your sampling/testing in 10-foot intervals as you drill (with casing above the interval in question), but that does slow the drilling process down and requires much more coordination between multiple contractors, all of whom are being paid for their standby time.

Intercepting a fault/fault zone actually can tell us quite a bit about the regional geology and the structure of the bedrock. We just have to be able to get a borehole in there long enough to do the evaluation.
Posted by Short Geologist at 6:34 PM No comments:

Bloom County and the EPA, part 3

Here's the last bit regarding the EPA. The previous installments are here and here. 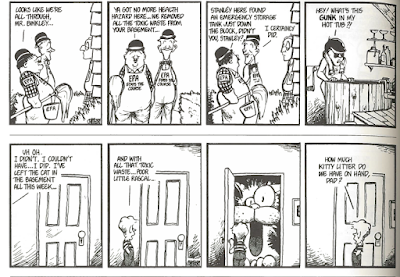 bloom county and the EPA, part 2

This is the 2nd day of my week of old Bloom County comic strips from the early 1980s. See my last post for the first installment. 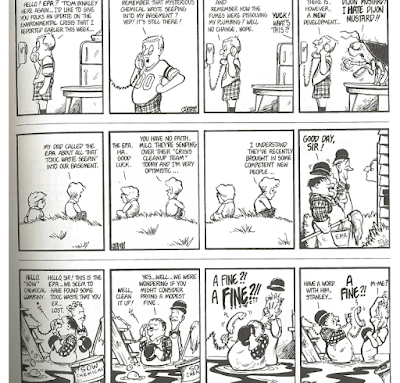 Reading these old strips, its amazing how little has changed. Final installment later this week...
Posted by Short Geologist at 6:30 PM No comments:

Bloom County and the EPA

I happen to be a huge fan of Berkeley Breathed's... whatever cartoon series he's working on.

I was going through an Bloom County book (publication year: 1984) that I've had forever, and I found a series that I thought you'd appreciate. This is a scanned copy of my old book, and the picture is lousy (sorry). Rather than add everything at once, I figured that I would make this the week of Bloom County's EPA circa 1982-ish. 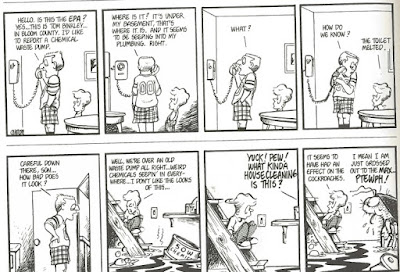 Posted by Short Geologist at 8:17 PM No comments:

"This comment is so totally wrong on so many levels that it would be best to take your comments back, think about them, and send another try."

Unfortunately, I don't have the cojones to actually send this back to the reviewing authority.

Instead, we engage in a very polite back-and-forth whereby we keep batting down side issues and non sequiturs, and by the time the comment back and forth is done, the problem with the original document has been lost and nobody is satisfied.
Posted by Short Geologist at 6:45 PM No comments:

I'm back from the holidays! Also, back from my usual bout of holiday illness. Ugh.

I saw a few weeks ago that Silver Fox had posted her 12 months of Looking for Detachment. The rules for the meme (originally from Drugmonkey) are simple: post the link and first sentence from the first blog entry for each month of the past year.

2016 was a bit of a bust for posts here, but heck, here goes. Once again, if my first sentence is an apology for not posting, it gets skipped.

January:  This is the time of year that I usually do my monthly recap of the year/monthly meme, where I post the first sentence of the first post of each month.

February:  You can get a sense for how my February has been going from the dream I had this morning.

September: I am not in a position to be observing or participating in routine environmental work on a regular basis.

October: I was looking back through my paltry list of blog posts this year, and the post on smartphones reminded me of this post regarding tablet usage in the field.


November: This is the natural follow-up to my previous post on solid waste storage.

December:  Now that it's the beginning of December, it's about the time to start worrying about ice cubes.

Ok, on to a more consistently-posting 2016!
Posted by Short Geologist at 6:52 PM No comments: