A long time ago, I mentioned the gear used to fish stuff out of monitoring wells. But I never did write the intended follow-up: what kinds of things have been permanently lost?

I could fill a book with the list of items that can be lost in the ground, so I figured I'd restrict myself to items that either I have lost or the contractors I'm overseeing have lost and not been able to retrieve. In order from least to most expensive/problematic:

1. These can be retrieved if you get a big enough pump (a vac truck or a drill rig with a Moyno pump will work), but the nuts and bolts for flush mount roadboxes tend to, um, disappear over time. If I have a site that's been monitored for more than 10 years or so, I often advocate for a full well rehab with something big enough to suck out all the hardware that accumulates over time.

3. A water level probe that somehow got wedged in the screen of a steel monitoring well. We eventually tugged a little too hard on the cord and it broke off right at the probe. There's nothing in a probe tip that would impact groundwater, right?... Right?

4. A check valve used to develop a former injection well popped off. The check valve was plastic, so no potential contamination issues, but it got stuck at the top of the screen, rendering the well useless. In an attempt to at least unplug part of the well screen, we reversed direction and tried to push it down the rest of the way, but only got it more firmly wedged about 2 inches down. We decided we didn't need that point so much after all.

5. Similar to #4 above, but for a much deeper well: the tubing for a bedrock well was cut too short and fell down the well. Apparently it was irretrievable (this was before I came along).  Without knowing there was more tubing wedged at the target interval,  I went to add tubing on my own. I got my tubing wedged with the other stuff cluttering the well. When we tried to pull the whole mess up, we overstretched the tubing we had (or rearranged things?), and when we let go, it sproinged back down the well just out of reach. Now there's really no way to fit tubing down to where it needs to go.

7. When drilling in an alluvial valley, we installed a monitoring well screened from something like 110 to 120 feet below grade. When the drillers pulled up the temporary 6-inch casing, the bottom 60 feet were missing. The borehole had apparently collapsed above the casing, and since we had no idea if the bottom casing was still blocking the well screen, we had to abandon the well and re-drill. 60 feet of lost casing = cranky drillers.

If I cast my mind back, I could find an even 10, but I think this is long enough. Just remember - you can always fix something that's permanently lost, even if it's by grouting up the borehole and re-starting. It just gets... expensive.
Posted by Short Geologist at 9:07 PM 1 comment:

I can't remember when I noticed this, but I have a 1-year mistake in my stats here at blogspot. When I look at my overall stats (stats, overview, change view of the chart to "all time") and hover my mouse over the individual data points on the chart, all the months are correct back to February 2009. But back further, they're off by a year. So it goes from February 2009 to January 2008, December 2007, and so forth, ending in July 2007, when the stats think I started the blog.

Anybody else have this issue?
Posted by Short Geologist at 8:30 PM 5 comments:

I was browsing through the CME catalog a while back, trying to find a name for a particular bit when I didn't have a rig in front of me to point to. I noticed a whole section on "optional accessories",  which reminded me of a few things that can make a big difference in the driller's effort expended (and therefore the amount of time I'm out there watching the rig). Although I am not a driller and am not experienced in all the mechanics, I've seen enough different crews/rigs/methods that I have strong opinions on the stuff that really makes a driller's life easier.

1. SPT (standard penetration test) auto-hammer. There's a standard for determining soil density: the number of blows it takes to drive a 2-inch split spoon 6 inches using a 140-pound hammer dropped 30 inches. You can have a guy use a cathead (spinning wheel that rope is wrapped around), which means he is essentially yanking on a piece of rope and allowing it to drop over and over and over again, or you can use an auto-hammer and just pull a lever. Not only is the former method laborious and exhausting, but you're also depending on the driller to drop the weight at just the right height every time.

2. hydraulic breakout wrench. A driller cranks on and cranks off various threaded rods all day long. Crank on to go down the hole, crank off to come back up. And if you're doing any spinning (which you are with most drill methods), it will take a lot of effort to get the rods to first separate ("break"). Without a hydraulic breakout wrench, every 5 or 10 or 20 foot section has to be yanked at with the drillers manning 2 giant wrenches and cheater bars. Not only is the hydraulic wrench a lot faster, it's also safer.

3. Pipe carousel (generally found on larger rigs). Rods are mounted on the carousel and when one rod is in the ground, the carousel rotates and another rod is available immediately. Without this, the rods are individually picked up and swung into place.

4. Mud pump. A driller is going to pump a lot of grout, and possibly drilling mud. Better to have everything on board and sized properly rather than using a succession of trash pumps scattered around - a good rig-mounted mud pump can handle anything, including nuts and bolts.

I've seen a lot of cheap, jury rigged drill rigs. I realize it's easy for me to comment, because I'm not the one paying for them, but minimizing the amount of labor and manhandling of large/heavy equipment is not only faster, but infinitely safer.
Posted by Short Geologist at 5:54 PM 2 comments:

Sorry this week is light on content... all of my ambition has been frozen with this weather. Anyway, The Big Picture last week had some lovely photos on erupting volcanoes, such as this one: 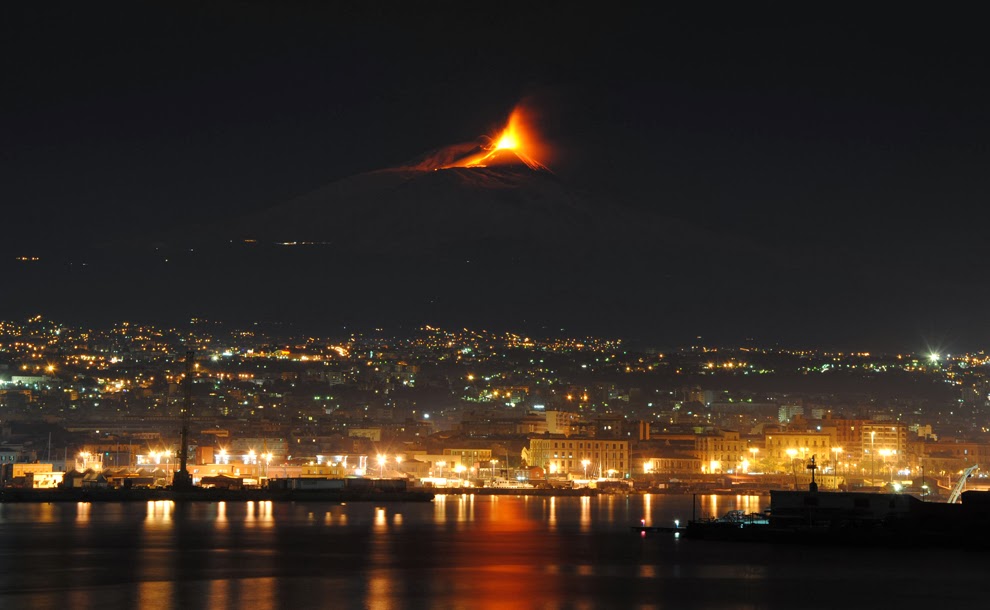 The forecast is looking more positive (above freezing, even) in my area this week, so maybe the lava fields won't look so tempting then.
Posted by Short Geologist at 7:30 PM No comments:

I missed December's Accretionary Wedge about plants and rocks - I really need to keep up on my geoblogosphere reading! I am not a botanist, and my knowledge of plants is generally restricted to the local ones which can cause me trouble, such as poison oak and poison ivy. I do have one piece of botanical/geological advice:

If you are trying to locate pockets of soil deep enough to get a good non-surface soil sample, and you are ass-deep in boulders and cobbles and outcroppings, you are often limited in the areas you can get your drill rig. It is tempting to try and drill in the center of an area that is relatively free of trees. However, there's probably a reason the trees aren't at that area. Far better to maneuver to one such clearing, and then aim the drill rods right at the edge, close to the trees. You're much likely to get something other than a rock ledge with 4 inches of dirt on top.
Posted by Short Geologist at 5:56 PM 1 comment:

In a recent post, I mentioned that the HAZWOPER course can be tremendously useful for getting interns out into the field.

I was fortunate in my own internship, ages ago: not only did the company pay for the 40-hour course, but they also paid for my time to attend and for my lunches while I was taking it. This was mind-boggling for college-age me.

The real advantage to me was when I started looking for a job after college. The firm I had interned for was in a hiring freeze when I graduated, so that was out. But my 40-hour course and the fact that I had worked in the field before was a big help when I graduated from college, and allowed me to entertain a couple different job offers in a lousy economy.

I'm a firm believer in having training expenses paid by the employer. With that said, having the 40-hour course already can make a big difference if you're starting out in the environmental biz and don't much (if any) experience to point to. As much as I hate to admit it, it may be worth sucking it up and spending the couple hundred bucks for the course.
Posted by Short Geologist at 7:02 PM No comments: