A while back, I discussed how I prepared for the ASBOG tests that are required for the Professional Geologist (PG) license in many US states. I mentioned that I did successfully pass both tests (Fundamentals of Geology and Practice of Geology). But when I was actually in the exam room, which parts did I have the most trouble with?

I didn't have too much trouble with the Practice of Geology - as an environmental geologist, I had all of the hydrogeology down cold. I'd also gone a little overboard on the oil and gas calculations when I was studying, since those were new to me. So even though I didn't have any professional experience with those topics, I was ok with those questions.

I was able to work out some of the obscure vocabulary questions by process of elimination. And I could get through some of the longer form questions (like the ones that referred to a geologic map and asked "which event happened first") also by process of elimination. The parts that tripped me up tended to be the areas of geology that I had some familiarity with through work (like engineering geology and geophysics) but that I don't actually do myself. When I came to specific questions in those topics, it turned out that my vague and minimal studying wasn't quite enough to answer them.

I ended up taking my PG tests with several people I knew personally or by association, and most of them failed the Fundamentals of Geology test. I wasn't comfortable asking them what parts they particularly struggled with, especially considering that I ended up doing ok. So I figured I'd put it to the general readership: if you took either test, how did you do with the material? Did you discover any unexpected gaps in your cramming education?
Posted by Short Geologist at 6:51 PM No comments:

I'm not approached to identify rocks very often. Most of the time I'm working in the field, I'm not in a location that's visible to the public, and when I am, I'm usually not doing something that obviously involves rocks. That's fine because rocks aren't actually my thing.

A while back, a maintenance guy working on one of my sites noticed that my business card had a variant of the word "geologist" on it. He mentioned that he lived in an old house, and that while they were renovating it, he found a funny rock tucked behind a wall. Could he bring it in for identification?

I expected him to bring in a piece of slag (often confused for rock around here, and in some places, much easier to find than bedrock), or maybe a rock with some reasonably large chunks of mica.

What he actually brought me was a fist-sized, perfectly formed crystal that I could have used as a type example for a mineralogy class. It also happened to be rare enough that I could give him a short list of local mines that it most likely came from. I'm not going to show the actual mineral here because it was so locally specific, but picture something like this (from here): 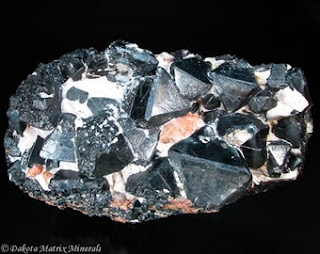 (Franklinite, pictured above, is a tad more rare than the mineral I identified, but you get the point)

So I got to tell him that his "funny rock" was actually a historically and geologically valuable specimen, and that with a bit more research (mine years of operation vs. house renovation/build years), he may be able to ferret out a very small list of places it actually came from. He could sell it for a reasonably high price, but I hope he holds onto it - it would make a great family/house heirloom.

Posted by Short Geologist at 5:34 PM No comments:

Jeremy Fox has a recent post that discusses reasons for starting a science blog... or for not starting a science blog. The Dynamic Ecology blog is a group effort, but the group consists of academics. As a non-academic (industry) blogger, I had a different set of issues to contend with when starting to put my ideas out for public consumption.

Public outreach: I don't have any metrics or get any "points" for public outreach. I like public outreach, and I enjoy being out there in the field as a visible lady scientist, and I'm happy to answer any and all questions while I'm working (to the extent possible). But my job doesn't have any components at all related to educating the general population about scientific topics. It would occupy the same space on my résumé as volunteering for the local food bank - a nice do-gooder hobby that would only be useful in that it could be thought of as a form of networking. So, blogging wouldn't help my career that way.

Research publicity: One of the big differences between academia and industry is the focus of the science/research. In academia, I could work on my own thing and (at least in theory) be beholden only to Science. I work for a client, and my work product is owned by the firm. Depending on what I'm doing, my work may end up in the public domain in the form of public documents/filings. But the actual intellectual work - the arguing over cause/effect, the loose ends that need to be explained, the division of the workload, the polishing of the text? All that messy stuff is hashed out in private among a group of scientists prior to document finalization, whether that document is a memo to the file, a letter to a regulator/opposing counsel, or a big report. For me, there is no upside and a whole world of hurt if I publish internal deliberations for a recognizable product.

That's ok. I'm having fun over here even though my blogging will likely never have a positive career impact - it isn't intended to.

Posted by Short Geologist at 10:20 PM No comments:

A comment on this recent post reminded me that I haven't directly addressed one of the most intimidating parts of the consulting biz: being billable.

Because consultants are mostly paid by the hour (and even for lump-sum projects, I've always billed hourly to the project so that internal management can see if the project's on track), we need to track what we're working on. And if we're not billing to a project, we bill to some sort of administrative project.

The tracking of hours really isn't that complicated - it just becomes a habit. I keep a running tally of what I'm doing throughout the day, and then at the end of the day, I figure out how many hours I've billed to each project. Fieldwork is easy because it's usually one project all day. I used to use a flurry of post-it notes and scrap paper, but now I have a notebook-based system so I can go back and check. Other non-luddites may use tracking software, but I like the ability to jot things down on paper while I'm going from one task to another.

Of course, the big fear for newbies is not having billable work. Here's the thing: having billable hours merely quantifies what would be happening anyway. If I never have a project to work on and I'm just twiddling my thumbs all day, a firm would have a problem with that regardless. Having it in numbers just makes it more obvious. A reasonable firm will have an understanding that nobody will spend their time entirely on billable work - people go on vacation, have mandatory training, work on proposals, etc. And sometimes work is slow and after you go through the round-robin of all the people who may have work for you, and you can't find anything billable, you end up reorganizing the equipment room or watching some webinars. That's life.

Entry-level staff have the least agency, and are less likely to have long-term projects that they can pull out and work on when work slows down. However, those people often have extremely high billability overall, because they tend to do the bulk of the fieldwork. Also, they're cheap. It's really not a hardship for them to be temporarily non-billable. Higher level staff (like me) aren't expected to be quite as billable, because we're more likely to work on proposals, train other staff, and have explicitly non project-related management work. In my experience, higher level staff are also expected to "eat" more hours and not charge as many hours to administrative tasks as they actually work, but this varies so much that I can't really generalize.

Switching from a non-billable environment (academia, oil and gas, etc.) can be an adjustment, but I don't think it's intrinsically more stressful than other work. But maybe I've just gotten used to it...
Posted by Short Geologist at 6:20 PM No comments:

Most environmental projects with a field component have an office-based project manager (PM), who works out the budget and schedule, deals with the client, and bargains with the other managers for appropriate personnel.

Then the field crew goes to work. The crew has a dedicated field team lead, who's responsible for getting the work done and communicating any issues/changes to the PM, who will notify other stakeholders (including the client) and adjust the overall project accordingly.

If you're a PM and your field crew is working outrageous hours, you need to be available for those hours. You may not need to be in the office, but you need to be on-call. Sure, it sucks to be chained to your phone in the evening or get rousted out of bed early in the morning, but the field crew doing your work is out there in the (potentially lousy) weather, doing physical and possibly stressful work.

Also, if the crew comes back from working long hours in the field and needs to spend another several hours in the office processing and shipping samples, and the PM is going to spend the rest of the afternoon at a golf tournament, the PM shouldn't be surprised if the field crew is a little... testy.
Posted by Short Geologist at 7:19 PM 1 comment: