My cousin is a freelance writer who has a popular blog on writing. She makes enough to live on.

I like my psudonymity. Only two people in my life know about this blog, and one has never expressed the slightest interest in it. And that's fine. But when I found out about my cousin's blog, it was really hard not to immediately announce "I have a blog, too! And sometimes I even have commenters!" on her wall.

Note to self: if you tell 136 of your nearest and dearest that you write this blog called "accidental remediation", you can kiss your pseudonymity aside.

It is sort of tempting, though.
Posted by Short Geologist at 7:43 PM 2 comments:

Silver Fox's post today reminded me of a common problem I would run into when sampling: unlikely "stratigraphy". In her case, her samples got mingled together.

I quickly figured out that if I had the same soil type in the first couple inches of the sampler (every 2 feet, natch), then I was getting some "slough" in the top of the sampler. There are ways to minimize this - a common and easy way is to only collect 1 sample per interval and not "stack" the samplers. The problem is always convincing the driller that we need to use the slower, more tedious method.

One of my earlier posts complained about my problems convincing drillers to do what I needed. At this point, I think I've been able to overcome my short stature and youthful looks - the key is to be friendly but firm in the beginning...and find a way to work my actual age/experience into the conversation as soon as possible.
Posted by Short Geologist at 8:29 PM No comments:

Today was a lovely day. We had a nice lunch break, sitting on the tailgate and enjoying the day. However, I was reminded of a common lunch-time mistake: not securing the heavy equipment/ samples/whatever to your usual standards because you're just going out for a quick bite. This is especially true if you're working at some sort of secure facility. After all, you have security keeping an eye on things, right?

The problem is that when it's a nice spring day, everybody ambles outside on their lunch break. And what do they see? This funny-looking equipment with all sorts of interesting stuff and only a lame chunk of caution tape keeping out the curious.

I was working on paperwork while eating a granola bar (the drillers were out buying lunch), and I had to scurry over and intercept some overly curious office workers.

I don't mind explaining what we're doing - at a safe distance. And lunchtime is actually an ideal time to gather some people and explain some of the technical stuff. I don't have to yell to make myself heard, I'm not (usually) terribly busy, and there's no moving parts to worry about. I just need to make sure I'm there to do the explaining.
Posted by Short Geologist at 5:06 PM 1 comment:

Silver Fox has several posts up recently about drilling. See here and here. One of the reasons I enjoy her blog is because it gives me a new perspective about the exploration biz.

Even though we are both geologists who have worked on drilling rigs, taking rock samples, our actual work is not necessarily similar because of scale differences.

When I'm in the field, collecting rock samples, it's usually just me, a driller, and a driller's helper. If I'm taking a bunch of analytical samples, I may have a helper; if the job is big or complicated, the driller may have 2 helpers. Once you get into the big jobs with multiple rigs running around at once, then you need at least one "field boss" to keep all the balls in the air - God forbid a rig runs out of work and is idle!

Sometimes, we may not care so much about the stratigraphy of the rock - we're just looking to find water-bearing zones and install a bunch of wells. In that case, we may use air-rotary methods and then I'm trying to discern something from the little chips blown up from the hole and caught in a strainer. We know we hit water when a) the rig drops, b) we get water blowing out of the hole, or c) the driller tells me (hey, sometimes I get distracted).

In other cases, we want as much detail as possible. So we'll use a diamond core barrel and collect core samples in 5-foot runs. That's when I get a traditional intact core and can spend some time doing all the traditional rock description work - where are the fractures, what do they look like, what are the minerals (if visible). I tend to set up the core where I can keep an eye on the drilling while I look at the core. If it's raining or the drilling is going fast or we're having problems, the core can get shoved in a corner and I can write everything up later.

We generally aren't in a super-big hurry to finish a particular job (unless the job got screwed up somewhere) and the margins aren't high enough to pay vast amounts of overtime, so we almost never work around the clock. In rare exceptions we work into the night, but I've never had to work past 10 pm.

Environmental geologists should (and generally do) watch the rig themselves. Why? Well, mainly because things are always changing for environmental sampling. We're often taking soil samples, which need to be legally acceptable (no cross-contamination, sampling interval is specified, don't let the samples air out, etc). We're often in high-visibility places and need to manage the public. Monitoring wells installed in the boreholes have to be done properly so that groundwater samples and other hydrologic data are again, legally defensible. And finally, environmental wells tend to be shallow (less than 150 feet in most cases), so there's always something new to do or prepare for.

So between Silver Fox and I, we've covered environmental and metal-resource drilling. Anybody want to chime in with differences for oil drilling?
Posted by Short Geologist at 6:11 PM 6 comments:

In an earlier post, Chuck asked about my usual working hours when working with drillers. Short answer: it depends.

In most cases, I let the drilling company take the lead on working hours, as long as it was at least 40 hours/week - I was completely fine with the "lets work really hard the first four days and have a short Friday" option. My personal preference is to start at 7-7:30 and to work until 4:30 or so, depending on whether or not the drillers take a lunch break.

Exceptions included: 1) facility-specific hours, 2) residential areas (those are pretty much straight 9-5 so that we're not waking people up or hammering away through their dinner), 3) other oddball access situations, such as working on an island and meeting the shuttle's schedule.

Of course, sometimes you end up working longer hours. For one job that started out behind schedule and over budget (and didn't get any better over time), our standard working hours were 7 am to 6 pm for the drillers, with 45 minutes added to either end for me. No lunch. Why? Well, the equipment set up and break down took a minimum of 2 hours each, plus several of our big costs were rental-based, and we were just trying to make some headway in the project and get on with our lives. The driller and I each had the pleasure of getting angry phone calls from our respective managers multiple times a day about the budgets we were draining. Budgets which we had no input in and no control over....

Sorry, rant over. But I would say that 90% of the time, the drillers' schedules would be something like 7:30 to 4:30 - enough to be productive, but not outrageously long.
Posted by Short Geologist at 6:36 PM 1 comment:

I think everybody knows about the volcano in Iceland now...we know that most of the folks trying to fly to/from Europe certainly know about it. The big picture has a couple nice photo spreads of the volcano: the first one here and the second here. My favorite picture from the most recent post is below. 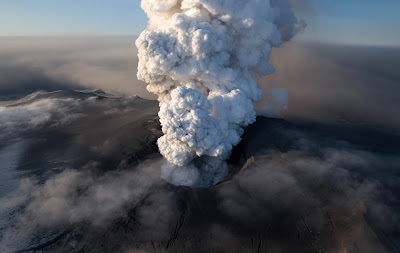 A pet peeve: if a mountain is spewing ash and/or lava, it is officially a volcano.

Also, I first saw the pictures from the first post this weekend and made the mistake of reading the comments (back when there were around 100 and not 708). Why oh why does every friggin' picture of nature inspire a flame war of "look how Mother Earth is hurting" vs "there is no such thing as pollution"? Seriously. This is getting tedious.

Posted by Short Geologist at 8:44 PM No comments:

Every spring when it finally warms up and get into the field, I think, gee, this weather's terrific! I am so glad that it's finally warm out!

I pull out my summer gear and stuff the mittens and wool hats and coveralls back in my "out of season" hidey-hole. I organize my equipment and miscellaneous other gear, set up wherever I'll be working...

and a cloud of gnats, midges, mosquitoes, and other annoying buzzy things descends on me. Oh yeah. Everything else likes the warm weather as well.

When I was in consulting, I usually couldn't just douse myself in bug repellent. We'd be sampling for volatile-type compounds, and usually if you're standing in a cloud of something smelly, you have the potential to contaminate those samples. Bug nets work for the flies and mosquitoes, but gnats? Not so much.

Posted by Short Geologist at 8:11 PM No comments:

So, I did have internet last week. And my workload was actually sort of reasonable. And I didn't have any burning interpersonal issues. And I finished my taxes before April, which is quite possibly the earliest I ever did my taxes (federal refund pretty much can canceled out the state taxes due, in case you were curious).

So why didn't I do any blogging?

You see, I was working in a new place. And I had an adventurous coworker. These two sets of circumstances seldom come together. So after work and a quick shower, we went out adventuring every day after work. We found a park with some famous natural stuff to see. We went window-shopping in a super expensive area. We spent several hours at a tacky tourist trap.

Between adventures, dinner, and work, I had barely enough time to sleep.

But don't worry, fair readers - I am envisioning unadventurous travel companions and repeat field sites for the foreseeable future and should be back to consistent blogging.
Posted by Short Geologist at 8:19 PM No comments: