An unfortunate reality of performing fieldwork in a large portion of the US is poison ivy/oak/sumac. The problem is that you tend to get more sensitive to it with more exposure, so even people who don't think that they're sensitive to it may find out that they become so later on.

I'm at the point at which any poison ivy I get becomes systemic. Now, medical experts will say "you can't spread poison ivy, blah blah" but the rash you get is a reaction. You can't give it to someone else unless you still have the urushiol (the oil from the plant) still on you, but I am telling you now as a friggin' personal expert that the allergic reaction does in fact spread if you are sensitive enough.

Take my most recent reaction, which was bad enough that it may have been poison oak and not poison ivy. It started on my face, with what I thought was a mosquito bite and sort of absentmindedly scratched all day. The next day I felt the itchy spot and I had 4 or 5 distinct itchy bumps and I knew it was poison whatever. I was worried about my pillow, so I threw all my bedsheets and pillowcases in the wash. I also took a very thorough shower with lukewarm water (hot water opens the pores). A couple days later, it popped up on my left hand and this rash got worse fast. This looked like another contact spot, so I tossed the gloves I'd been using and attacked all known surfaces with alcohol wipes. And I re-washed all my stuff. Twice. A day or so later, my left hand looked like this: 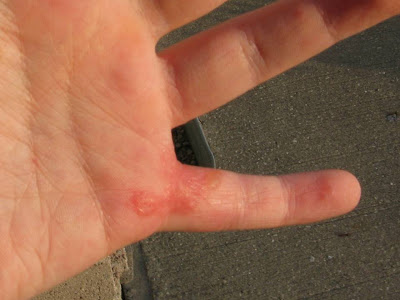 And then it spread between all my other fingers. Also, notice the little spots on the top of my little finger. Trust me. I wasn't touching a damn thing with my left hand. Now, usually I'm pretty anti-medicine. But when it went between all my fingers and the little blisters turned into massive blisters and my fingers were physically stuck spread apart, I broke down and got a prescription for topical steriods (basically a stronger hydrocortisone cream) which is the only stuff that helps me.

And then it went systemic. Little spots popped out right above my eyelid (scary!) and on my wrists. I got a big patch on my right hip, which I don't normally touch with my left hand, but which happens to be right where I had bad case of poison ivy a couple years ago. It appeared on my belly, my thighs, my back, my ankles. Nothing as bad as my hand, but they all still itched. I was chasing new itchy spots with hydrocortizone cream for about a week.

A word of advice: if you get a horrible, nasty case of poison whatever and you get really, really big blisters, for the love of God, don't poke/lance/pop them. They're huge for a reason. I made the mistake of lancing one when I got a really bad case of poison oak and it wept/ran down my arm all day long. It never deflated and the only reason it stopped running was because the little hole plugged with dried pus. *shudder* And if you can bind it up with gauze, you're a stronger person than I, because that skin is exquisitely sensitive.

So know your local poisonous plants! Wear pants and long sleeved shirts if at all possible! And if you get a rash, don't wait until it's excruciating to go to the doctor.
Posted by Short Geologist at 2:56 PM

It looks like a nasty case of poison oak you got. A field partner of mine once got poison oak all over and then it affected her lungs, and she had to have cortisone shots. We didn't even know we were in any - but I was wearing long sleeves and long pants; she was in short sleeves and shorts. I've been lucky so far.

My brother had a terrible case about a year ago. He was doing some yard work with a weed whacker in shorts and managed to hit a patch of poison Ivy with it. The machine sprayed his legs with a fine mist of poison Ivy. You can imagine the results. Wearing protective clothing and taking preventative measures is REALLY important.