This will be the week of frac tanks.

I complained about frac tanks in this post, but I wanted to mention something specific to those 21,000-gallon tanks that I find ridiculous and technically dumb: the berms you can rent.

So, if you have a very particular client or sensitive site, they may want the frac tank to have a berm around it. These can be rented along with the frac tank. Example below from here: 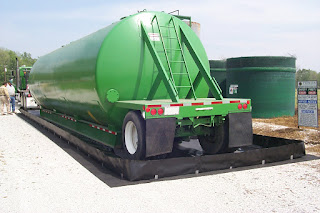 This doesn't have a frac tank inside it, but it's the same thing that I've rented in the past.

1. The berm is made of reasonably thick stuff, but it's not all that strong. If renting one, you are just as likely to get a beat-up old thing with pinholes everywhere. You can make the delivery person spend ages patching it with chemicals (probably not good for your chemical evaluation/inventory) or heat-sealing with open flame (also a problem for many sites) or make a stink and get them to deliver another. Even if you get a pristine berm, the action of backing a 21,000-gallon tank over it (whether it's on pavement or gravel), lowering the tank, and inevitably scraping the bottom along the ground will put new holes in it.

2. Say the delivery person did not make a hash of the berm/tank placement. Note the relative amount of water in the tank vs. the amount in the berm (less than a foot). This is not appropriate for anything except very incidental spills during filling. The kind you could eliminate by just draping some poly sheeting around as needed. Also, if you've parked the thing on any sort of slope, you'll lose a big chunk of the already-limited storage capacity.

3. What the berm is very good at is collecting rainwater, especially in a reasonably moist climate like most of the east coast. So you'll leave it alone for a while (for example, while you're waiting for your wastewater characterization) and then a regulatory person or adversarial inspector drops by and it's a crisis because "the tank is leaking!". You could eliminate the rainwater issue by stepping on the edge and letting the excess water out, but to say that's bad optics is an understatement. So you end up pumping that rainwater into the tank, causing premature filling and unnecessary dilution.

One way to minimize rainwater collection is to pull out the L-shaped supports (you can see them as metallic glints in the picture above) and flatten the thing until you're actually going to start slopping water around. But those supports aren't actually all that easy to pull out, especially close to the sides of the berm. Far better to just tuck in some poly sheeting and maybe some spill pads as needed and then gather them up as you finish.

As far as I can tell, frac tank berms are an excellent example of "optical remediation" - they're functionally useless, but they make decision makers feel like they're being extra clean and careful. Far better to use actual good housekeeping to keep a site clean, but that doesn't look as good on the check box, I guess.

Posted by Short Geologist at 7:01 PM