How did I miss this?

The bigger picture has part 1 and 2 of its photos of the year up. Part 3 will go up tomorrow. I was looking through the pictures and noticed this (from here): 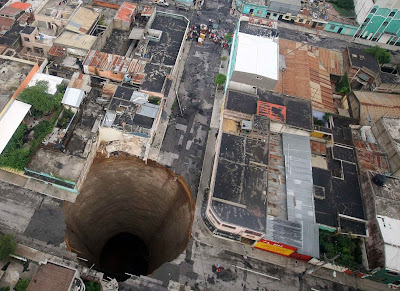 The caption (sorry it didn't copy over) states that the sinkhole in Guatemala City was caused by heavy rains from Tropical Storm Agatha. It's 60 meters deep. Luckily, nobody was injured.

Some google-foo found that this sinkhole, which opened up in May, is similar to another sinkhole that opened up in February 2007. This is an example of a piping pseudokarst, which is caused by the collapse of caverns that form in weak but somewhat cohesive soil - in the case of Guatemala City, uncemented ash and other volcanic deposits.

I am not a geomorphologist and the areas I have experience in are decidedly non-volcanic (and not prone to sinkholes at all). So this was new to me. If you're interested, there's a nice technical discussion of pseudokarst here and a less technical explanation buried in the lower bits of this wikipedia article.
Posted by Short Geologist at 8:15 PM